MILITARY SALUTES, MILITARY SOCIALISM, MARTIAL LAW
& THE PLEDGE OF ALLEGIANCE TO THE FLAG


Did Bellamy foresee soviet-style rationing, or did he inspire it?

Bellamy proposed the original socialist salute and the pledge after he joined the staff of the magazine "Youth's Companion."  Bellamy believed that the best way to promote socialism was by removing children from their parents and placing them in socialized schools (government schools) and other youth groups.  It was a view later shared in the military-socialist complex of the socialist trio of atrocities.

The salute and pledge were created by Bellamy to promote socialism among the youth in the most socialistic institution  -government schools (socialized schools). When the U.S. Constitution was written, children received private educations.  Bellamy lived during the time when schools were becoming socialized heavily in the United States.

Socialists use a sense of belonging to seduce people.  Socialist schools (government schools) are used to destroy individuality with regimentation and military-style submission (by children and their parents) to the commands of  government.  Bellamy had often lectured on the so-called "virtues of socialism and the evils of capitalism."  It was a modus operandi later shared in the military-socialist complex of the socialist trio of atrocities.

The Union of Soviet Socialist Republics and the National Socialist German Workers' Party demonstrated the full-blown military-socialism complex when they became allies in starting WWII and invading Poland, and thereafter (in 1946) the U.S. flag's socialist salute was merely altered, and the socialist pledge remained.  Both the pledge and the salute should have been dropped.

The U.S. is still an oddball in the world for the bizarre socialism of a pledge and salute to a flag, all because of a socialist and socialized schools.  And government schools started it in 1892.    It all helps explain how the U.S., and the world, have suffered so much sick socialism. 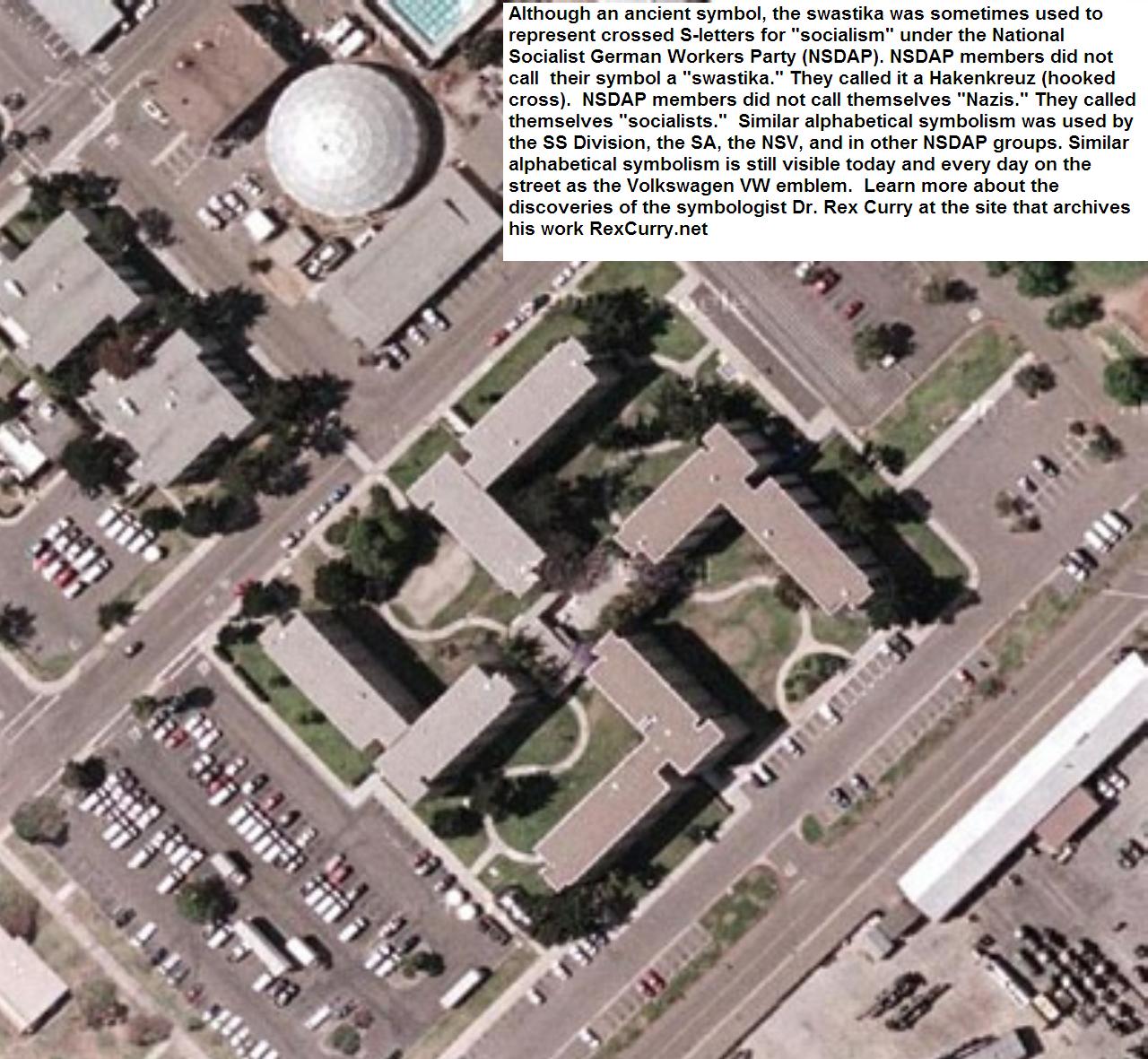 The Swastika building is a reminder of the swastika's use in the USA's history in Military Socialism.
http://rexcurry.net/military-socialism-militarism-socialist-complex.html

The swastika was used by socialists in the USA to support Military Socialism and it was used as alphabetical symbolism of meshed S-letters for "Socialism." Socialists in the USA used it for decades before it was adopted by the militaristic National Socialist German Workers Party.
http://rexcurry.net/45th-infantry-division-swastika-sooner-soldiers.html

Those discoveries are the work of the historian Dr. Rex Curry (author of Pledge of Allegiance Secrets). It should be noted that the building's swastika symbol is oriented horizontal to the adjoining street, yet oriented with north (up) at the top in the style of the Nazi flag.

The sad story is also related to the socialist origins of the Pledge of Allegiance.
http://rexcurry.net/pledge_military.html

One of the first and loudest critics of the Swastika Building was Dave vonKleist, host of a Missouri-based radio-talk show, The Power Hour. In spring 2006, he began writing military officials, including then-Defense Secretary Donald Rumsfeld about the Navy's Coronado Seabees Barracks in California, shown in this photo.
http://rexcurry.net/swastika-building-coronado-seabees4L-shapes1960.jpg

Socialists in the USA originated the Nazi salute, robotic group-chanting to flags, Nazism, flag fanaticism, and the modern swastika as "S" symbolism for "Socialism." http://rexcurry.net/pledge2.html

Much of that history is the history of the Pledge Of Allegiance. A new documentary video movie exposes the shocking facts on youtube
http://www.youtube.com/watch?v=BssWWZ3XEe4

Those historical facts explain the enormous size and scope of government today, and the USA's growing police state.  They are reasons for massive reductions in government, taxation, spending and socialism.

The "Nazi salute" is more accurately called the "American salute" as it was created and popularized by national socialists in the USA.  It was the early salute of the Pledge of Allegiance. The Pledge was written by Francis Bellamy. http://rexcurry.net/pledgetragedy.html

The original Pledge of Allegiance began with a military salute that was then extended out toward the flag. It was the origin of the stiff-arm salute adopted later by the National Socialist German Workers Party. http://rexcurry.net/pledge2.html

Francis Bellamy and his cousin Edward Bellamy called their dogma "Military Socialism."  The military salute is a sign of submission to a superior officer / commanding officer (in this case the flag / government) whose orders must be obeyed without question. http://rexcurry.net/1n1.gif

Francis Bellamy was cousin and cohort of Edward Bellamy. http://rexcurry.net/pledgebackward.html

Edward Bellamy and Francis Bellamy were self-proclaimed socialists in the Nationalism movement and they promoted military socialism.

They wanted the government to take over education and use it to spread their worship of government.  When the government granted their wish, the government’s schools imposed segregation by law and taught racism as official policy.  The official racism and segregation was a bad example three decades before the National Socialist German Workers Party, and decades afterward.

The Pledge was mandated by law in government schools for three decades before, and through, the creation of the National Socialist German Workers' Party. http://rexcurry.net/bellamy-edward-karl-marx.html

The original pledge was anti libertarian and began with a military salute that then stretched out toward the flag. In actual use, the second part of the gesture was performed with a straight arm and palm down by children casually performing the forced ritual chanting.  Due to the way that both gestures were used sequentially in the pledge, the military salute led to the Nazi salute. The Nazi salute is an extended military salute via the USA's Pledge Of Allegiance.

Media coverage about the discoveries continues to grow http://rexcurry.net/audio-rex-curry-podcast-radio.html

Fan mail for work exposing the Pledge’s poisonous pedigree is at http://rexcurry.net/pledge_heart.html

The Pledge's early salute caused quite a Fuhrer/furor. The dogma behind the Pledge was the same dogma that led to the socialist Wholecost (of which the Holocaust was a part): 62 million slaughtered under the Union of Soviet Socialist Republics; 49 million under the Peoples’ Republic of China; 21 million under the National Socialist German Workers’ Party. It was the worst slaughter of humanity ever.

People were persecuted (beatings, lynchings, etc) for refusing to perform robotic chanting to the national flag at the same time in government schools in the USA and Germany (to the American flag, and to the German swastika flag).

They also originated and helped to spread the stiff arm salute via the Pledge of Allegiance at their meetings.

As German socialism's notorious flag symbol, the swastika was deliberately turned 45 degrees to the horizontal and always oriented in the S-direction. Similar alphabetic symbolism is still visible as Volkswagen logos. http://rexcurry.net/swastika-audi-logo.JPG

The bizarre acts in the USA began as early as 1875 and continued through the creation of the National Socialist German Workers' Party (German Nazis or NSGWP).  American soldiers used the swastika symbol in WWI (against Germany) and the symbol was used by the American military during WWII. http://rexcurry.net/45th-infantry-division-swastika-sooner-soldiers.html

The NSGWP had clear roots in National Socialism promoted by socialists in the USA. Amazing graphic images that prove the point are at http://rexcurry.net/theosophy-madame-blavatsky-theosophical-society.html

The USA is still the worst example in the world of bizarre laws that require robotic chanting to a national flag in government schools (socialist schools) every day for 12 years. It has changed generations of Americans from libertarians to authoritarians. The government bamboozled individuals into believing that collective robotic chanting in government schools daily is a beautiful expression of freedom. http://rexcurry.net/book1a1contents-pledge.html 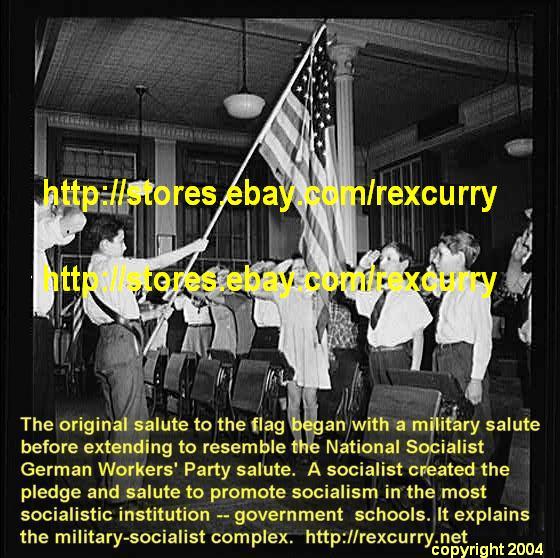 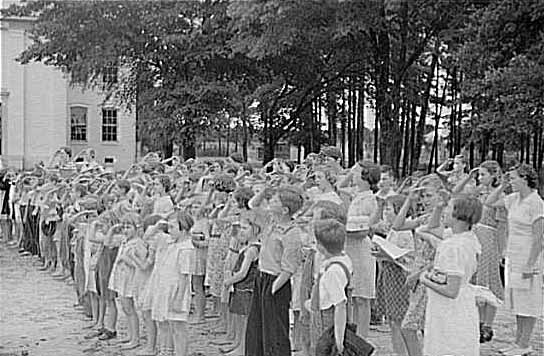